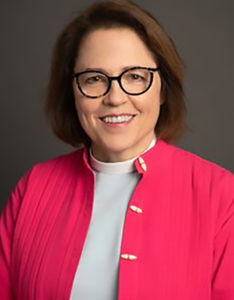 Janet Broderick, who pastors All Saints Episcopal Church in Beverly Hills, tested positive for coronavirus in March after attending a church conference in Louisville, Kentucky.

She described in an interview with New York Magazine how, as her condition quickly deteriorated, she was so sure she was going to die that she started planning her funeral, praying to Jesus and texting loved ones to tell them how much she loved them, even before she had received the test results back.

“I was close to death. I kind of had gone off the cliff — my lungs had to make a decision. I had pneumonia and water in my lungs. I remember thinking, calm down and go to sleep.

“I spoke to Jesus, I planned my funeral. I FaceTimed with my children. They say now I looked and sounded like Darth Vader. I was gasping for air.”

She pulled through and spent six days in the hospital. Although she is still in quarantine at home, she is grateful to be alive.

“Thank God, really,” she said, adding that she already wants to start preaching again this Sunday for her church’s virtual service.

“I have been trying to really use my time to do spiritual things. I write a devotional every day,” she said,

She went on to say there was “no question” she received preferential treatment because of her brother’s fame, something she said “breaks my heart”.

“I think I’m absolute living proof that this system is completely corrupt,” she said.

“My GP didn’t know I was Matthew Broderick’s sister and didn’t care very much. But as soon as I got ahold of the guy at the hospital who knew who Matthew was, I was given the name of the head of the emergency room.

“Well, trust me, the folks I’ve spent my lifetime working with in Jersey City would never have been given the name of the head of the emergency room. If they were, it would have been disregarded.”

She added: “My God, I hope this causes us to take some kind of look at how we are handling medicine in this country.”

Matthew Broderick, who is married to Sarah Jessica Parker and voiced the adult Simba in the original Lion King movie, told the magazine he felt “nervous and scared” after learning of his sister’s diagnosis.

“It was shocking,” he said, adding, “I’m worried about my family, my friends and myself. Everybody. It’s a very anxiety-filled time. We just have to be patient and try not to panic.”