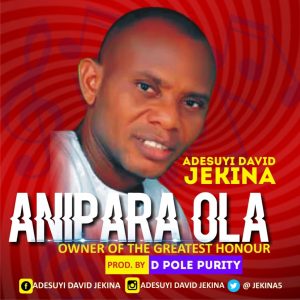 Nigerian Gospel singer has made a pre-eminent ingress into the gospel music industry as he debuts a brand new single. The anointed singer is definitely poised for action with this new one dubbed ‘ANIPARA OLA ’ in Yoruba dialet which translates in English as Owner of the GREATEST HONOUR. Adesuyi David started his music carrier from my childhood. He has released two albums, one in 2012, another in 2016 which gave his popular nick name, Jekina.

According to him; ANIPARA OLA (owner of the GREATEST HONOUR) is a single worship track that reveals the misery of Gods greatest honour among all creatures.