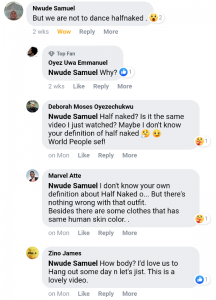 Social media was inundated with posts of fast rising Nigerian-Canadian singer and songwriter, Akuchay, employing the services of a so-called scantily dressed dancer in her recently released music video for her hit single YOU ARE GOD.

Apparently, while others were enjoying the worship song and singing praises to God, an eagle-eyed individual was able to spot a ballet dancer in the sensational music video. He made his observation without mincing words by posting the comment, “But we are not to dance halfnaked” (sic).

​​This got people talking on post with them sharing their own views for or against the issue. While many didn’t see anything wrong with the outfit of the ballet dancer and it is the appropriate costume, a few saw it as something that could cause a stir and lead to lust among the brethren.

As fate and faith would have it, popular blogs and social media influencers like Instablog and Tunde Ednut also joined in saying a thing or two on the issue.

However, the artiste in the midst of the storm, Akuchay, has put out a statement via her social media pages (@iamakuchay), reacting to the (non-)issue. See her response below:

“My attention has been drawn to reports on social media about me featuring an half-naked dancer in my recent worship single titled YOU ARE GOD.

I’m glad that the video has gotten more supporters than accusers and I’m grateful to everyone that has said something positive about the song rather than looking for loopholes. Some people did not even watch the full video before condemning. It’s out on YouTube & Facebook and doing well on those platforms by God’s grace.

People like the accusers are the reason Christianity has and continues to be given a bad name. Always so judgemental, self-righteous and full of hate. When last did you study to understand the word of God? If you can’t control your lustful ways as a man/woman, even a fully clothed man/woman will still appear lustful to you.

“Woe to you, teachers of the law and Pharisees, you hypocrites! You are like whitewashed tombs, which look beautiful on the outside but on the inside are full of the bones of the dead and everything unclean.

In the same way, on the outside you appear to people as righteous but on the inside you are full of hypocrisy and wickedness. Mathew 23:27-28

Learn to emulate the ways of Christ Jesus who came in human form to die for us sinners. I’m sure you will be quick to cast the first stone also when it also comes to gay/transgender people. Judge not lest ye be judged! Also take note of Mathew 7:3:5 ooh and definitely Mathew 21:32 because Jesus had you in mind when he spoke of this.

Finally beloved, before you sleep tonight, meditate upon Romans 2:1-3 and 1 John 4:8.

Watch the full video before you condemn.”

​​​​​We would like to hear from you. What’s your view about all this? Was the outfit of the ballet dancer unfit for a Gospel Music Video?