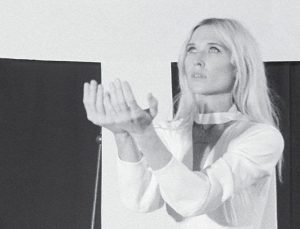 Natalie Bergman releases Mercy, an album of twelve sublime and spiritual songs that she wrote, performed, produced and mixed herself…because she absolutely had to. As the first project the Wild Belle artist has created and released under her own name, Mercy is a “moving tour-de-force” (SPIN), closing the loop on a solitary and profoundly sad chapter of her life that first began in October 2019. From experiencing an unthinkable family tragedy to spending weeks in silence at a monastery in the desert, the music of Mercy showed Natalie Bergman her greatest purpose, and provided her the hope to come back to life. Now, channeling the cleansing sounds of psychedelic soul, ’60s pop and traditional gospel, she opens the portal to the LP’s “land of milk and honey” (The FADER), and invites listeners to “find sanctuary in the soft and swaying rhythms” (NYLON).

Listen to Mercy, out everywhere via Third Man Records: https://orcd.co/nataliebergmanmercy

Watch Natalie Bergman and the Chicago Children’s Choir perform the album’s mission statement, “Talk To The Lord,” in a surreal, Sesame Street- and Sol LeWitt-inspired video debuted with the Recording Academy this week:

Mercy has earned early praise from the likes of Aquarium Drunkard, BUST, KCRW, MOJO, Uncut and many more. In a new profile, The Times calls it “otherworldly…an example of the power of art to transform pain into something positive, even celebratory.”

Natalie Bergman will discuss her journey to Mercy in an interview on NPR Weekend Edition tomorrow, and will have more to share next week, including a striking new addition to a series of multimedia music videos she has unveiled over the past several months. Revisit “Talk To The Lord,” “Shine Your Light On Me” and “Home At Last.”