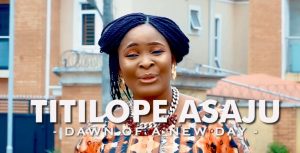 Nigerian Gospel artiste and worship leader, Titilope Asaju has released the official music video to her latest single, “Dawn of the New Day“. The new visual directed by Korrect Films, features narrative scenes that portray the lyrics of the song, also emphasizing the power of prayer in our lives.

According to her, “Dawn of the New Day” was composed out of deep thought and a grateful heart to God Almighty.

Titilope Asaju is a music minister and recording artiste who enjoys dwelling in the presence of God. She believes in the regenerative power in the word of God and the understanding that prayer changes whatever situation we find ourselves in, hence the song inspiration.

In 2019, she released her self-titled EP “Titilope” featuring four (4) tracks including her well-received “Wait on You” (feat. Dotkeez).