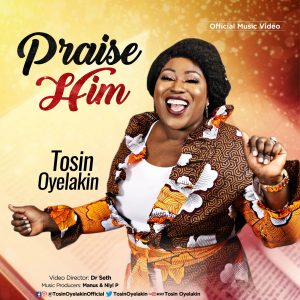 Tosin’s first release of the year 2020 comes in the form of the official music video of her widely acclaimed rock praise song, “Praise Him.”

The video was directed by Dr Seth and it depicts the joy and freedom that we have when we praise God regardless of our situation. People from every tribe, every tongue and every race, regardless of their gender, age and social status, should always Praise Him!

Watch the video below:

Tosin Oyelakin is a Nigerian-British Gospel Singer/Songwriter who has been singing in church since about the age seven, first in her church choir in her country of birth Nigeria and today in the UK where she now lives.

Tosin’s mandate is to bring to all who come in contact with her and her ministry, the pure and undiluted love of Christ through her music and inspiring words of wisdom.

In February 2016 Tosin released her debut 3 track EP, ‘You’re Precious’, which is a combination of contemporary gospel sounds and deeply inspirational words, that seek to bring comfort and healing to all those who are in need of it.

In 2018, Tosin released her full 15 track album titled “My Offering, My Everything” of songs solidly based on the scriptures. The songs themselves are in an eclectic mix of genres/styles ranging from upbeat rock praise songs, to worshipful, inspirational, dance, RnB, and Afro beat songs. There is definitely something in there for everyone regardless of their taste in music. The album has birthed so many testimonies in many countries of lives being touched, blessed and inspired to worship God in spirit and truth.

Tosin is a physiotherapist by profession and is married to her wonderful husband – Akinsola Oyelakin. Together, they are blessed with 2 beautiful children.