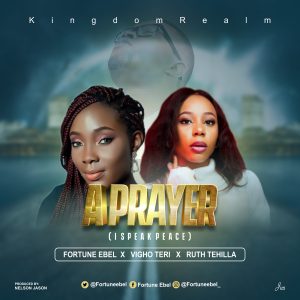 Fortune Ebel releases a Peace song, featuring two of his Singers – VighO Teri and Ruth Tehilla. The song is titled “A PRAYER” and here’s the reason he gave for writing the song:

“From BC to AD, time at certain points of its transition keeps presenting challenges to humanity: some minor and some major. But be it the former or the latter, the consistent truth is that at the end, We Always Win (WAW)!

As the world faces another upheaval; whether the pandemic is the real thing troubling humanity or it’s a mere mask for something deeper, unleashed by some humans against fellow humans; the prayer said by I and KingdomRealm is “ , . Humanity needs peace and LOVE is the price we must pay to have it.