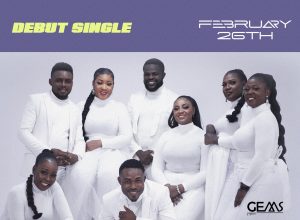 After making their official appearance much earlier this year, brand new gospel singing group, GEMS are set to crown their official entrance into the music scene with the release of their debut single titled “My Praise”.

With the list of emerging acts and bands on the rise, the GEMS seems to be clearly cut on their mission as a gospel music band and their vision which is “bringing God to the nations and bringing the nations to God, through music” as stated again by founder Oma Ojinmah. They are truly here and ready to shake things up.

The band, made up of gifted individual singers and artists have been busy recording some of their singles and videos most of which they have scheduled to be released this year. It will be a busy year for them with all they have planned for 2021 alone and one of such projects is a live in-studio recording, and several more projects which they wont let out full details on so far.

“My Praise” , their debut single, led by Ronny Reigns and Minister Aitee, will be released officially on February 26th in both audio and video. The single is a song of worship and exaltation to God and a sound that would stir up hearts in intense worship to God.

Stay expectant for this is the newest gospel music band on the block and they are here to stay.

Save the date, February 26th

As we wait, you can follow them on all Social Media platforms;