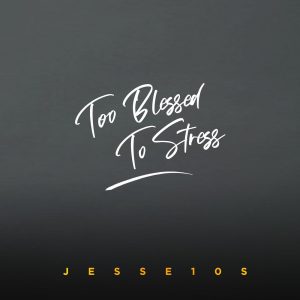 American Singer Jesse10s, announced the release of his 2nd studio album TOO BLESSED TO STRESS across the major digital streaming platforms.

The official announcement came with a public premiering of an accompanying video for one of the tracks on the album – ‘Control’ which had been released earlier and featured Nigeria’s Award winning Christian Afrobeats singer Limoblaze.

TOO BLESSED TO STRESS – already received early buzz as a star-studded project made available for pre-order/pre-save and has surged to close to a hundred thousand streams on Spotify alone on the released date. The New album is loaded with nine tracks of goodies that take sound from different continents and cultures. With two of the tracks previously released and having made exponential impact on the airwaves in Nigeria, Uganda and Brazil to name but a few.

In Jesse10s ‘s own words when asked about his inspiration for this body of work said, “This album is a compilation of hope, faith & testimonies of the Lord’s goodness in my highs & lows. As the world went through a global pandemic, I was hit with depression, anxiety, & the people I trusted most turning against me. Through it all, one thing stood out to me, God’s love is bigger than our shortcomings and if He is on our side, nothing can ever stand against us. Finding my identity in Christ and realizing how blessed I am to be loved by my Father in Heaven, made me grow my faith and trust in Him.”

With Tracks like LOCO, CONTROL ft. Limoblaze, FOR ME (Blesso) ft Virtuoz, NEED YOU (remix) ft Orlando Rivera, AMAZING ft Rabbi Le Prince, OH LORD, PARTY ft Amose, YESU BAMBI ft Kingdommusic and BORN AGAIN Jesse10s reinstates his believe that No matter the storm, or how bad things may get, he can choose to trust in God despite what reality may say. According to him, God will always have his back because he is a child of God and has realised that he is “Too BLESSED To STRESS”.

His growing Fanbase however will have lots to digest this season. The US singer did not come to play. What is obvious is that with all 2020’s challenges and pressure he still came out a diamond!

The official video for CONTROL which premiered on and is currently showing on MTVBase, TraceNaija, TraceMziki, TraceGospel and other local channels is also available on Jesse10s ‘s official YouTube Channel.

This musical offering is now available for streaming and downloads on all major digital streaming platforms worldwide via the link below.